Skip to content
OIB took advantage of good weather to the west of the Antarctic Peninsula (a difficult weather region this year) and completed the Thwaites-Getz 3 Beam IS-2 mission. This mission was modified to account for the orbits of ICESat-2 today and tomorrow, which placed the survey area west of Mounts Murphy and Takahe and east of Toney Mountain, rather than the eastern shear margin of Thwaites Glacier (as originally nominally designed). Today’s mission was also corrected for the presently understood off-pointing of ICESat-2 from its RGTs, so as to get the best opportunity to date to obtain near-coincident OIB data beneath ICESat-2 over land ice, and was flown at a survey elevation of 3200’ so that ATM T6 (wide scan) sampled both beams in each IceSat 2 beam pair and all three beam pairs along two ascending and descending IS2 orbits. All OIB remote sensing instruments onboard NASA 817 reported good function and data collection.
OIB will check the weather tomorrow and see if we can keep our mission streak going.
Today is Veterans Day- Eleventh month, eleventh day, eleventh hour- Thank-you to all who sacrificed, and all who served!
[Wikipedia.. thanks Rob! /s]
Mount Murphy massif
A massive, snow-covered mountain with steep, rocky slopes, rising to 2,705 m directly S of Bear Peninsula, Marie Byrd Land. The mountain is bounded by the Smith, Pope and Haynes Glaciers. Delineated from aerial photographs taken by USN Operation HighJump in January 1947. Named by US-ACAN for Robert Cushman Murphy of the American Museum of Natural History, noted authority on Antarctic and sub-Antarctic bird life. While serving on the whaler and charted the Bay of Isles region of South Georgia.
Mount Takahe
A large, isolated snow-covered mountain (an extinct volcano) standing 40 mi SE of Toney Mountain in Marie Byrd Land. It is roughly circular, 18 mi across, and rises to 3,400 meters. This mountain was probably among those viewed from a distance by Admiral Byrd and other members of the USAS in plane flights from the ship Bear on Feb. 24 and 25, 1940. It was visited in December 1957 by members of the Marie Byrd Land Traverse Party, 1957-58, who applied the name. “Takahe,” the Maori name for a flightless, almost extinct New Zealand bird, is the nickname of the U.S. Navy LC-47 aircraft whose crew resupplied the traverse party near this mountain and assisted by providing aerial reconnaissance to locate passable routes.
Toney Mountain
An elongated snow-covered mountain, 38 mi long and rising to 3,595 m in Richmond Peak, located 35 mi SW of Kohler Range in Marie Byrd Land. The mountain was probably among those viewed from a distance by Admiral Byrd and others of the USAS in plane flights from the ship Bear in February 1940. It was mapped in December 1957 by the oversnow traverse party from Byrd Station to the Sentinel Range, 1957-58, led by C.R. Bentley who proposed the name. Named after George R. Toney, scientific leader at Byrd Station in 1957, a participant in several Antarctic and Arctic operations, serving in both field and administrative capacities. 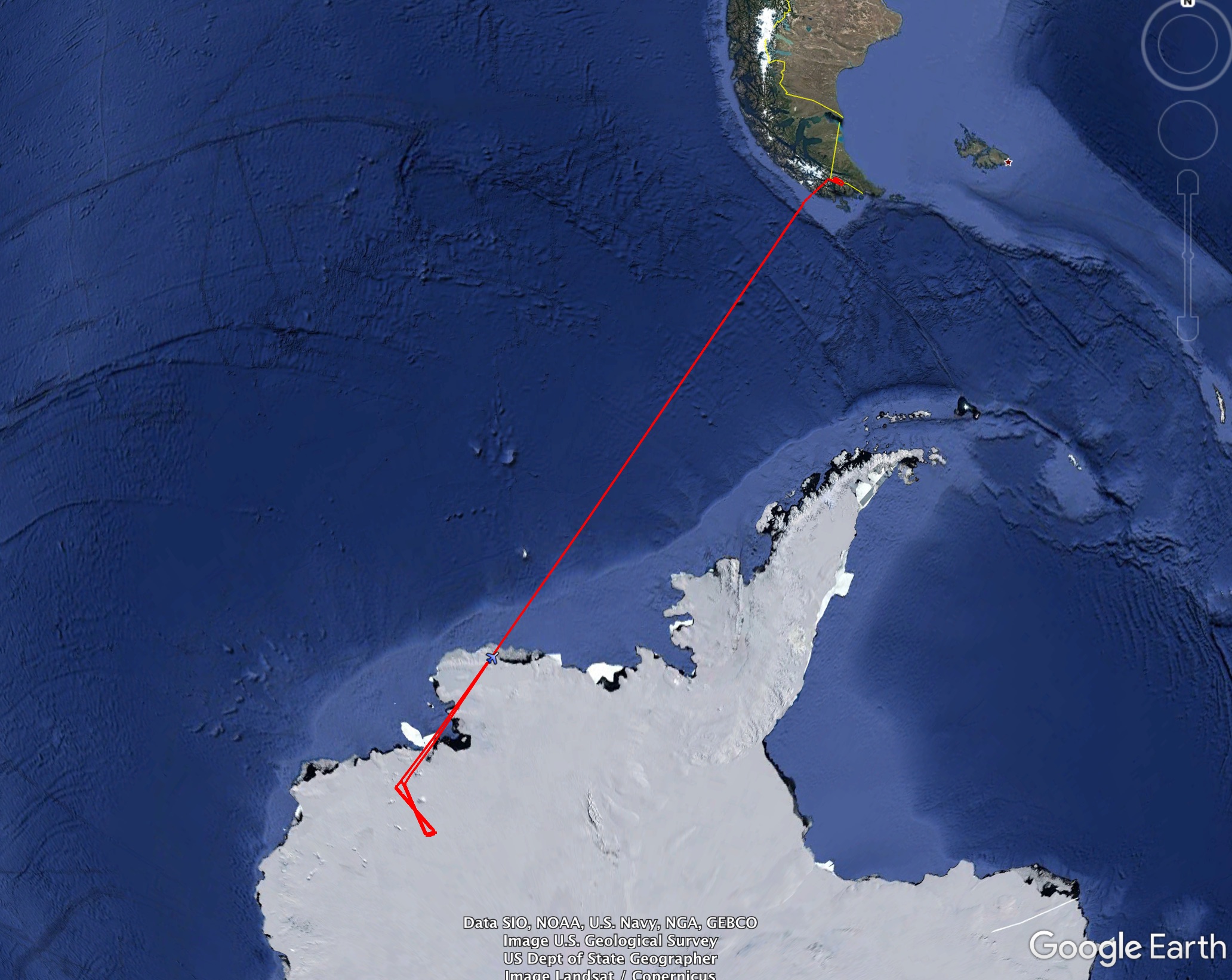 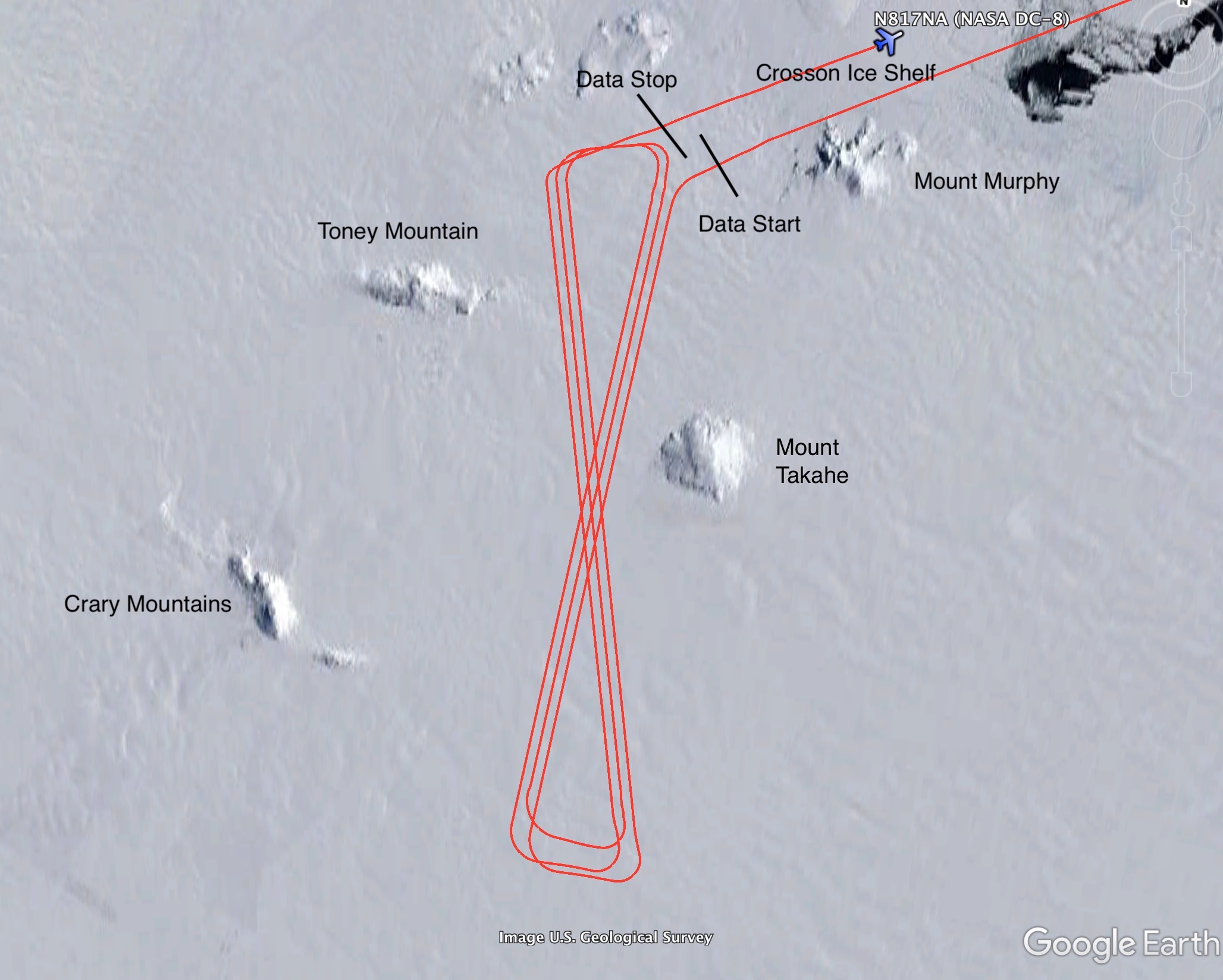 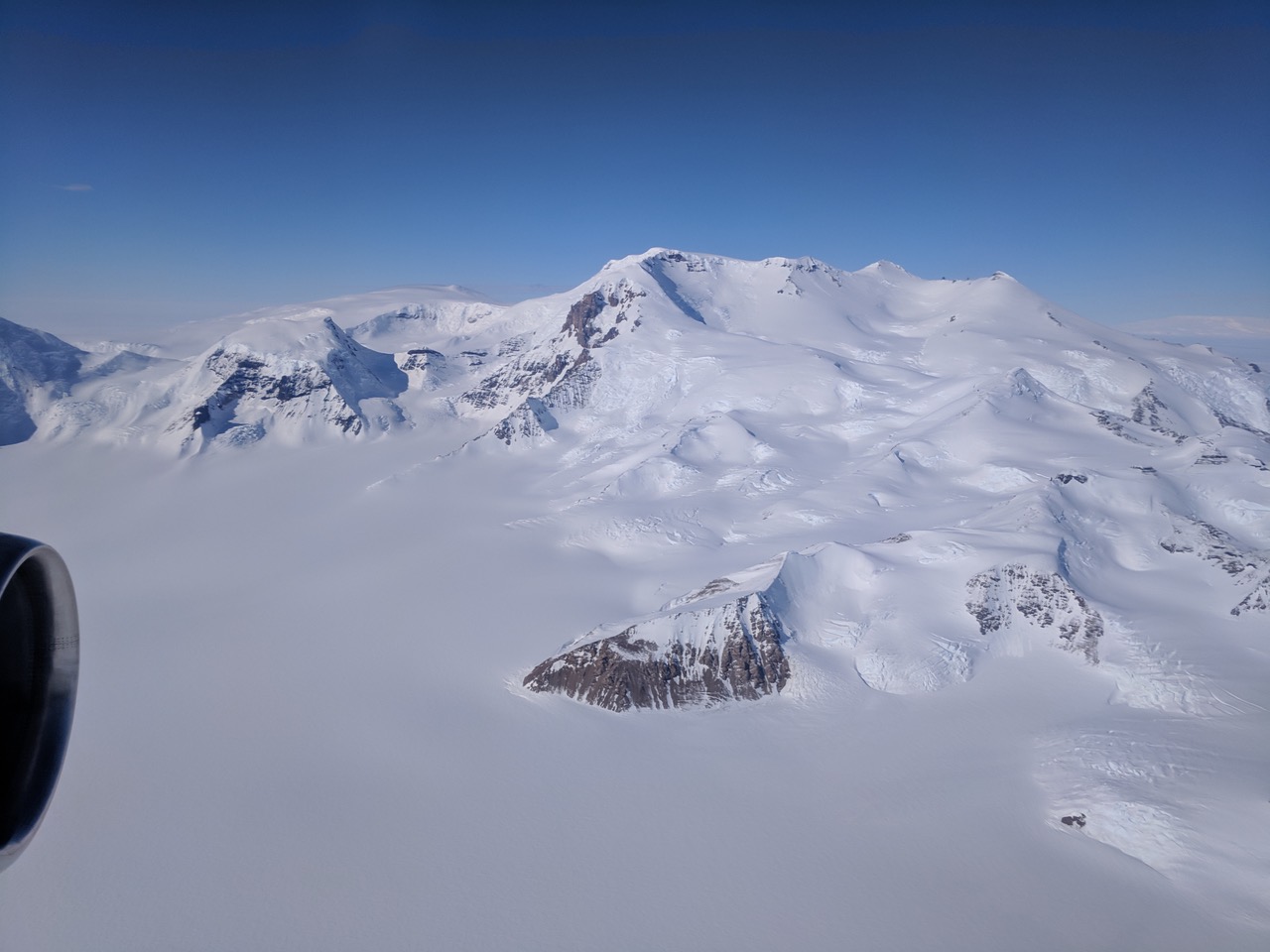 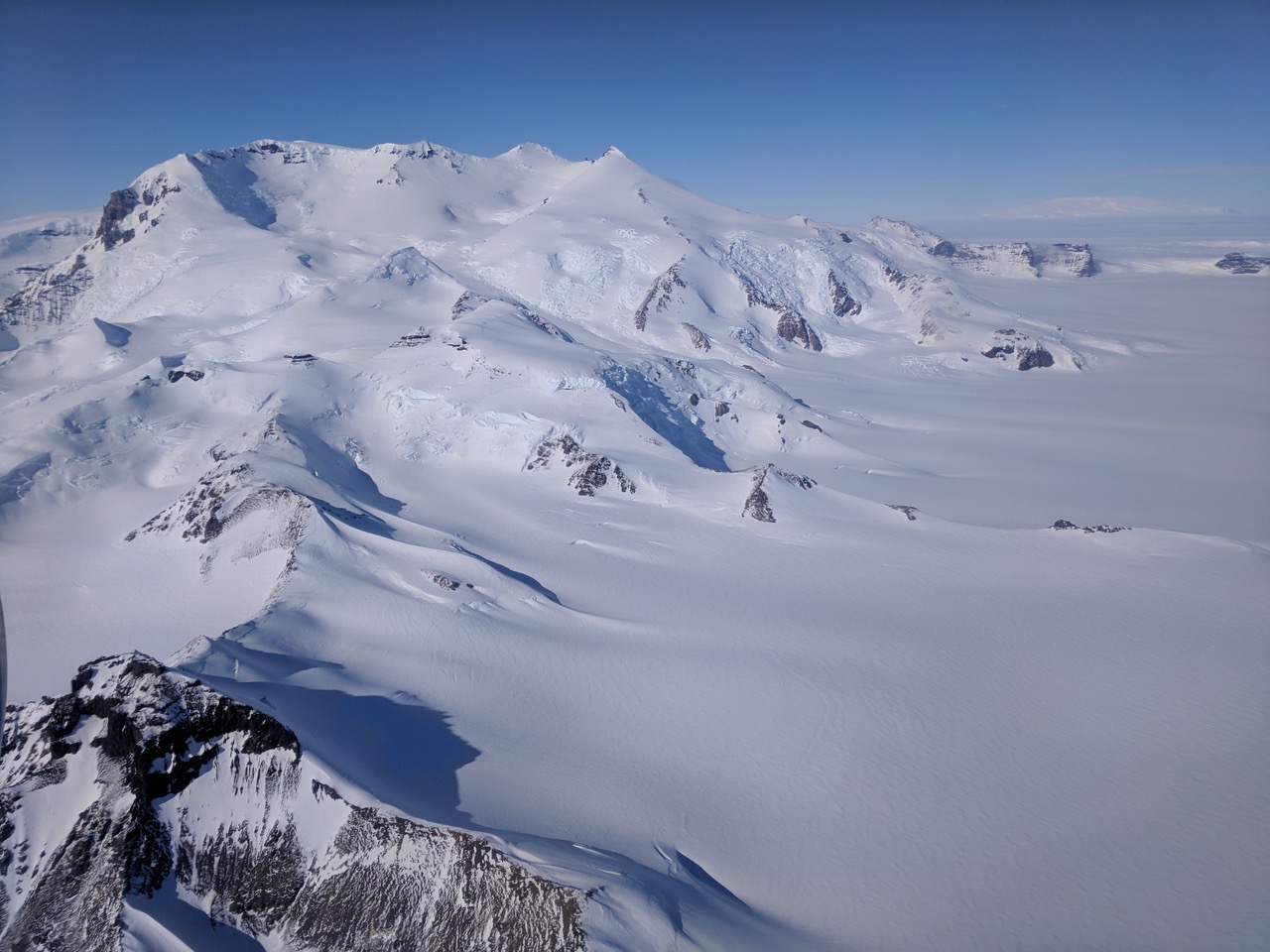 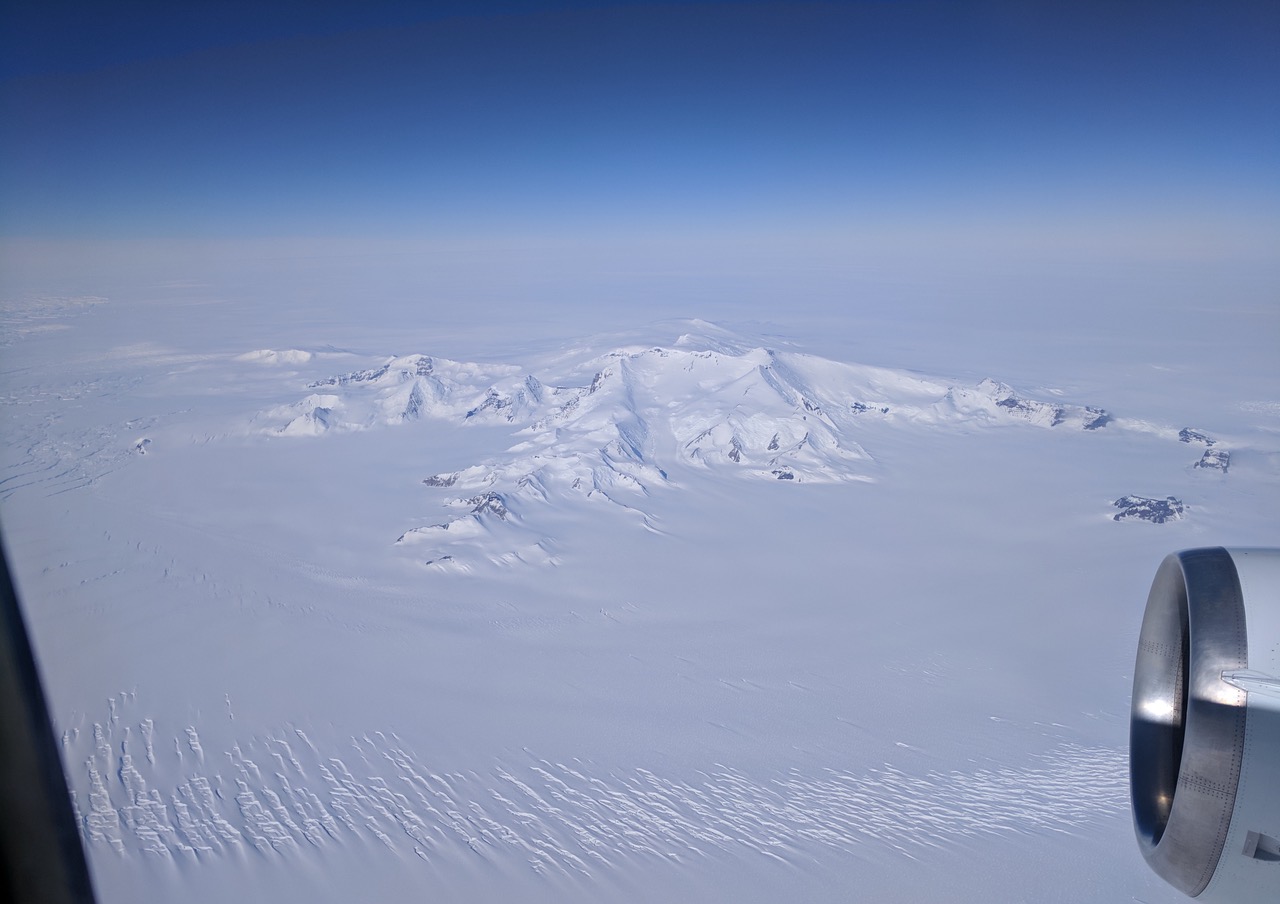 Mount Murphy from altitude during climb out