So I’ve been messing with amps and records and stuff, and I already mentioned that I ran across a small amp that uses 6J2 tubes. What the heck are they, and why would someone want to have a fragile tube in an amp? Are they for looks, or do they actually do something?

Here is the pinout:

Ok, that’s not really helpful. We have pins 1-7 and a little diagram. What the heck do the pins connect to and do?

This tube made in China is also called a “6AS6” tube. Here is the original description and pinout of that tube from… geezus, 1950? I have no idea. But here it is: 6J2 Chinese clone tube .

So, what sorcery is working inside this tube (if any)? Let’s try to figure that out!

Ok, so that is the more detailed section from the PDF that I linked above. If you are like me, this makes no sense at all. Heater? Heater? Plate? Grids? Let’s try to get to the bottom of this.

Here is a copy and paste of a website that basically explains everything. The original link: https://www.engineering.com/ElectronicsDesign/ElectronicsDesignArticles/ArticleID/16337/Vacuum-Tubes-The-World-Before-Transistors.aspx

In any modern-day electrical device—from alarm clocks to phones to computers to televisions—you’ll find a device called a transistor. In fact, you’ll find billions of them. Transistors are the atoms of modern-day computing, combining to create the logic gates that enable computation. The invention of the transistor in 1947 opened the door to the information age as we know it.

But computers existed before transistors did, albeit in a rather rudimentary form. These massive systems took up entire rooms, weighed thousands of pounds, and for all that, were nowhere near as powerful as the computers that we can fit in our pockets today.

Rather than being built out of transistors, these behemoth computers were made up of something called thermionic valves, aka vacuum tubes. These lightbulb-looking devices are now more or less obsolete (with one or two notable exceptions), but in their heyday, they were critical to the design of many electronic systems, from radios to telephones to computers. In this article, we’ll take a look at how vacuum tubes work, why they went away, and why they didn’t go away entirely.

The basic working principle of a vacuum tube is a phenomenon called thermionic emission. It works like this: you heat up a metal, and the thermal energy knocks some electrons loose. In 1904, English physicist John Ambrose Fleming took advantage of this effect to create the first vacuum tube device, which he called an oscillation valve.

Fleming’s device consisted of two electrodes, a cathode and an anode, placed on either end of an encapsulated glass tube. When the cathode is heated, it gives off electrons via thermionic emission. Then, by applying a positive voltage to the anode (also called the plate), these electrons are attracted to the plate and can flow across the gap. By removing the air from the tube to create a vacuum, the electrons have a clear path from the cathode to the anode, and a current is created. 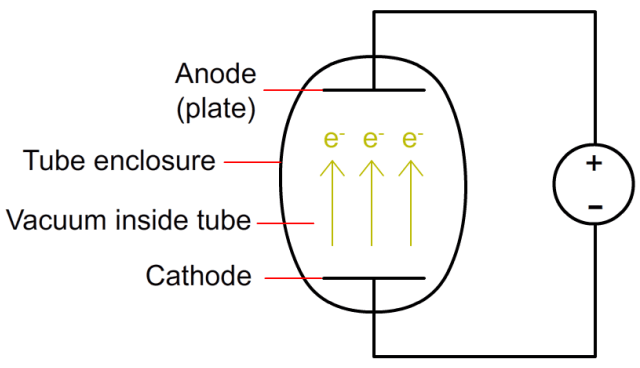 A simplified diagram of a vacuum tube diode. When the cathode is heated, and a positive voltage is applied to the anode, electrons can flow from the cathode to the anode. Note: A separate power source (not shown) is required to heat the cathode.

This type of vacuum tube, consisting of only two electrodes, is called a diode. The term diode is still used today to refer to an electrical component that only allows an electric current to flow in one direction, although today these devices are all semiconductor based. In the case of the vacuum tube diode, a current can only flow from the anode to the cathode (though the electrons flow from the cathode to the anode, recall that the direction of conventional current is opposite to the actual movement of electrons—an annoying holdover from electrical engineering history). Diodes are commonly used for rectification, that is, converting from an alternating current (AC) to a direct current (DC). 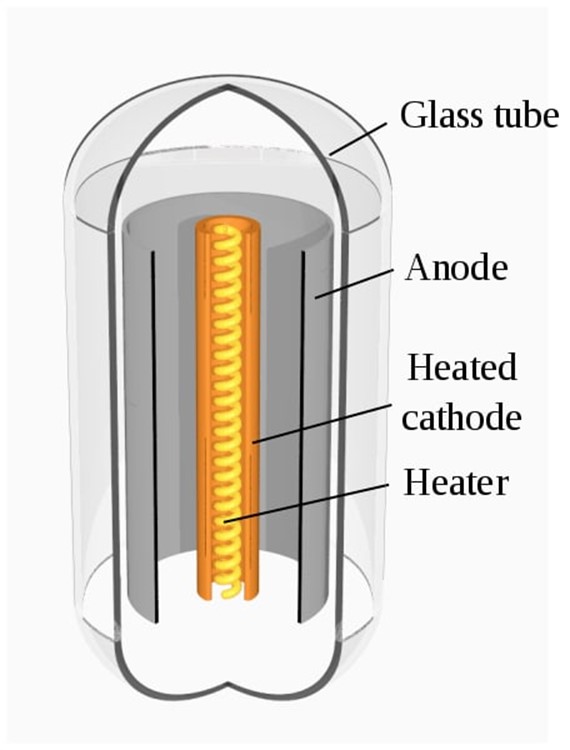 A more realistic representation of a vacuum tube diode. The electrodes are arranged as concentric cylinders within the tube, maximizing the surface area for electrons. Here, the cathode is heated by a separate heating filament, labeled Heater. (Image courtesy of Wikipedia user Svjo.)

While diodes are quite a handy device to have around, they did not set the limit for vacuum tube functionality. In 1907, American inventor Lee de Forest added a third electrode to the mix, creating the first triode tube. This third electrode, called the control grid, enabled the vacuum tube to be used not just as a rectifier, but as an amplifier of electrical signals.

The control grid is placed between the cathode and anode, and is in the shape of a mesh (the holes allow electrons to pass through it). By adjusting the voltage applied to the grid, you can control the number of electrons flowing from the cathode to the anode. If the grid is given a strong negative voltage, it repels the electrons from the cathode and chokes the flow of current. The more you increase the grid voltage, the more electrons can pass through it, and the higher your current. In this way, the triode can serve as an on/off switch for an electrical current, as well as a signal amplifier. 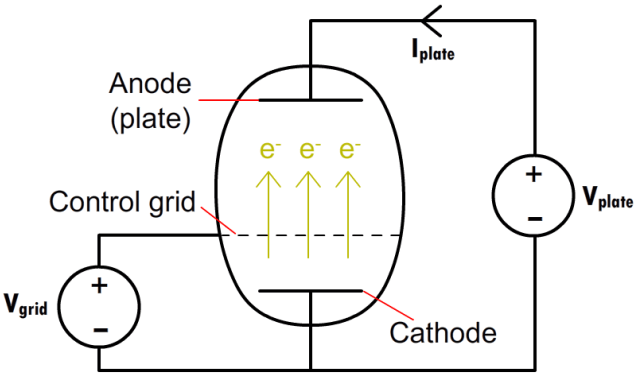 A simplified diagram of a vacuum tube triode. A minute adjustment to the grid voltage has a comparatively large effect on the plate current, allowing the triode to be used for amplification.

The triode is useful for amplifying signals because a small change in the control grid voltage leads to a large change in the plate current. In this way, a small signal at the grid (like a radio wave) can be converted into a much larger signal, with the same exact waveform, at the plate. Note that you could also increase the plate current by increasing the plate voltage, but you’d have to change it by a greater amount than the grid voltage to achieve the same amplification of current. 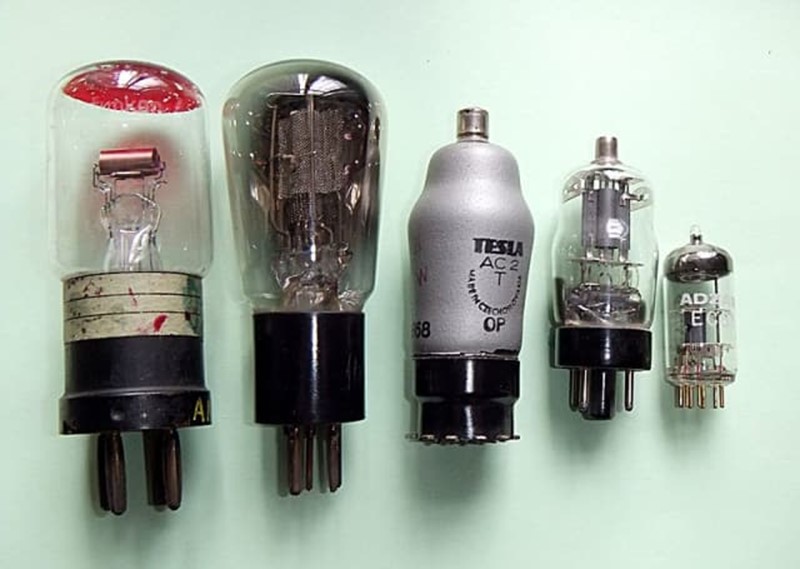 The evolution of triode vacuum tubes from a 1916 model (left) to one from the 1960s. (Image courtesy of Wikipedia user RJB1.)

But why stop at three electrodes when you could have four? Or five, for that matter? Further enhancements of vacuum tubes placed an additional grid (called the screen grid) and yet another (called the suppressor grid) even closer to the anode, creating a type of vacuum tube called a tetrode and a pentode, respectively. These extra grids solve some stability problems and address other limitations with the triode design, but the function remains largely the same.

The Transistor Is Born, but the Tube Lives On 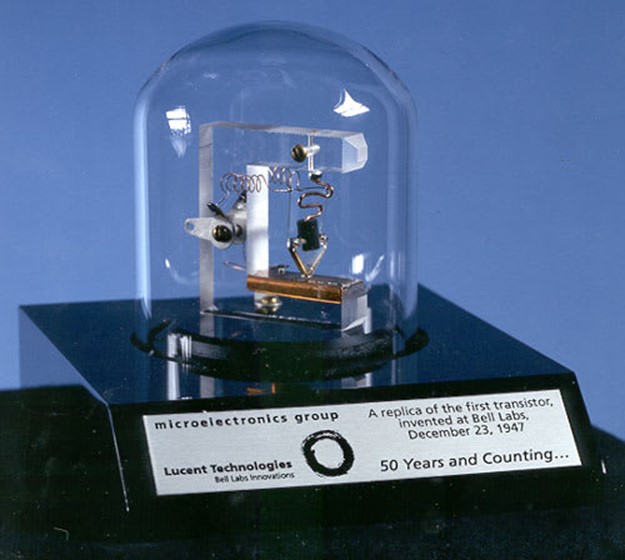 A replica of the first transistor created in 1947.

In 1947, the trio of physicists William Shockley, Walter Brattain and John Bardeen created the world’s first transistor, and marked the beginning of the end for the vacuum tube. The transistor could replicate all the functions of tubes, like switching and amplification, but was made out of semiconductor materials.

Once the transistor cat was let out of the bag, vacuum tubes were on their way to extinction in all but the most specific of applications. Transistors are much more durable (vacuum tubes, like light bulbs, will eventually need to be replaced), much smaller (imagine fitting 2 billion tubes inside an iPhone), and require much less voltage than tubes in order to function (for one thing, transistors don’t have a filament that needs heating).

Despite the emergence of the transistor, vacuum tubes aren’t completely extinct, and they remain useful in a handful of niche applications. For example, vacuum tubes are still used in high power RF transmitters, as they can generate more power than modern semiconductor equivalents. For this reason, you’ll find vacuum tubes in particle accelerators, MRI scanners, and even microwave ovens.

But perhaps the most charming modern application of vacuum tubes is in the musical community. Audiophiles swear by the quality of vacuum tube amplifiers, preferring their sound to semiconductor amps, and many professional musicians won’t consider using anything in their place. Whether there’s any merit to this preference is a matter of some debate, but you can dive more into the fascinating world of tube sound in this thorough IEEE Spectrum article. 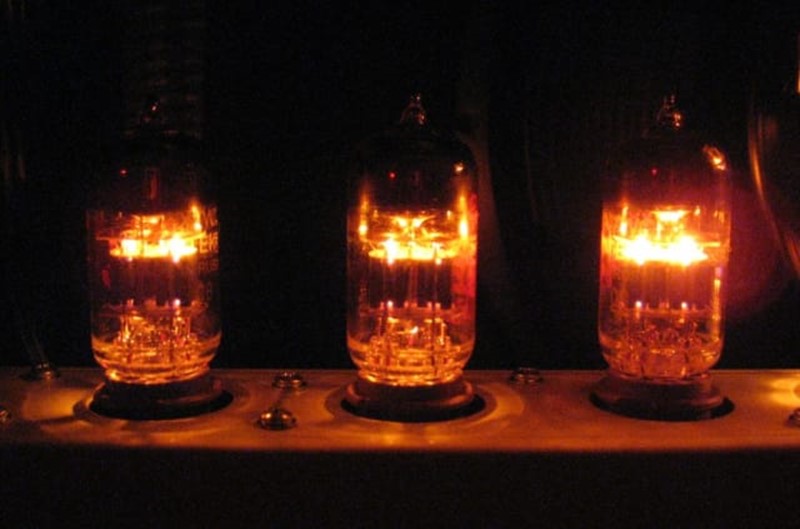 Vacuum tubes being used in a modern guitar amplifier.

Vacuum tubes had their day, and now the world is powered by transistors. But what does the future hold for electronics? With Moore’s Law reaching its limits, and quantum computing looming tantalizingly on the horizon, it’s anybody’s guess where the wave of technological advancement will bring us next.